This dish is pretty well known all over Japan and 3 of its prefectures: Gunma, Nagano and Fukui all has their own signature way of making this great dish. In this blog post I'll be talking about specifically the Fukui style sauce Katsu don. So what is sauce katsu don? Well, to know about that you first have to know what a katsu don is. A katsu don is basically deep fried pork cutlet over rice. Usually they like to use a thick cut of pork sirloin to make the cutlet and then batter it and covering it with panko bread crumbs before deep frying it. Now sauce katsu don is basically the same thing but the deep fried pork cutlet itself is dipped in a sweet sauce (the sauce varies depending on the region you're eating it). In the Fukui style sauce katsudon, they have 3 slices of katsu (2 pieces of pork thigh meat cutlet and 1 piece of pork sirloin cutlet). Since the pork cutlets are thinly sliced, the meat stays juicy and tender but also maintain the crispiness from the deep-frying.

Oroshi soba is another really famous dish in Fukui. It is basically cold soba noodles with grated radish and katsuo as toppings. Unlike the normal type of soba where you have a sauce dish and you're suppose to take some noodles and dip it in, here you pour the sauce right in to the soba noodle dish itself and eat it. At the end you can pour the remaining juice in the soba plate to the sobayu (the water they boiled the soba in) and drink it. 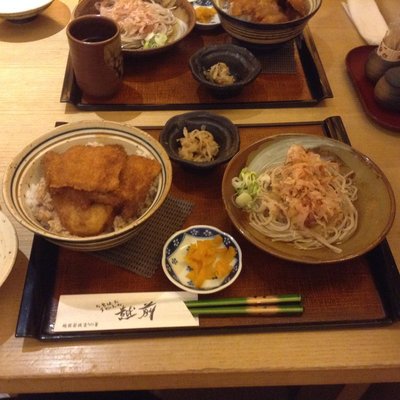 I have been to Miyazaki prefecture before but the last time around I didn't really eat lot. In order to make up for it I tried to eat more this trip to share some new local specialty dishes I've found. In this blog post I will be talking about a dish called the "hiyajiru", which basically means cold soup if you transliterated it directly from Japanese to English. The dish is separated into a bowl of cold soup and a bowl of hot steaming white rice. The cold soup is made from white sesame paste, miso paste, tofu and green onions. It was my first time ever trying the dish and didn't know what to expect but the waitress there was really helpful and she taught me how to eat it. The way you're suppose to eat is to pour some of the cold soup over the rice and eat it. The taste is a little bit sweet and salty with a very deep sesame flavour to it. If you're not allergic to sesame then I would recommednd trying this dish because those who like it will love it! There are many restaurants around Miyazaki city which serves this dish and the procedure of making the soup and the ingredients might also be different. Since I only had 2 days in Miyazaki prefecture and the first day I've spent in in Nobeoka city I could only try the "hiyajiru" at one shop. If you have the time I do recommend maybe trying a few more to see which shops' "hiyajiru" suits your tastebuds more! 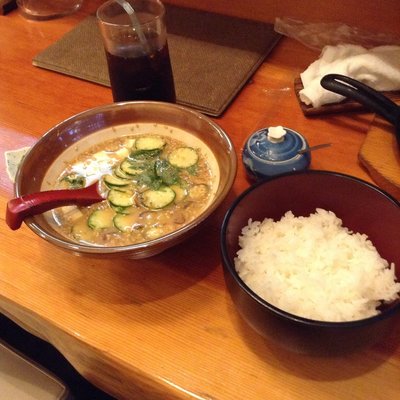 The Obihiro butadon is a famous local dish in the region of Tokachi in Hokkaido. Every butadon in the nation of Japan looks up to the butadon in Obihiro because that's where it was originated from. In this version of the butadon the slices of pork are marinated in a sweet sauce and grilled to perfection. You order according to how many slices of pork you want in your bowl of rice (usually the slices of pork you can order and written on the menu). Some shops like to decorate their pork slices with green peas while others chooses not to. I believe that the butadon tastes amazing with or without the peas on top of the sliced pork. Although there are very limited slices of pork on the bowl of rice the sauce helps out a lot in devouring the left over white rice. If you are open in trying new food and have a sweet tooth then I will definitely recommend this dish for you. 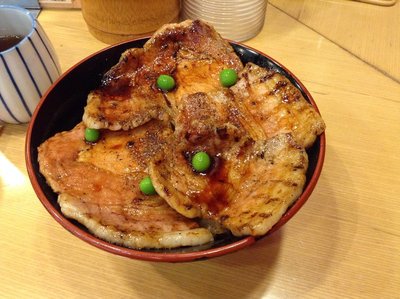 Obihiro butadon I had near Obihiro station.

Kasu udon is an Osaka classic dish. When people hear the word Osaka, one might immediately think of takoyaki and okonomiyaki but never udon. However, udon is something really common in Osaka and most of the people here eat it nearly every single day. So why is it called "kasu udon"? We all know what udon means so I will not be covering that part but I will go into the meaning of "kasu". The Japanese word "kasu" means leftovers, however don't take this meaning the wrong way. This dish is a bowl of soup udon topped with spring onions and chopped up beef small intestine pieces. The small intestine pieces is sometimes fried before putting it into the udon. If you are up for a nice warm but cheap meal in Osaka then this is the food to go for. 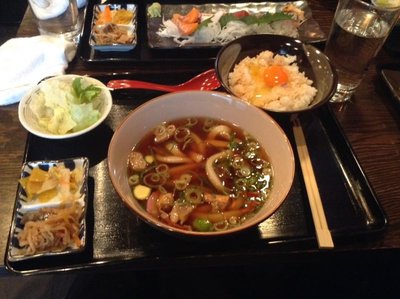 Kasu udon with raw egg on top of white rice.

Beni-shouga is one of the most famous side dishes in Japanese culture when eating gyu-don (beef rice bowl). Beni-shouga is the neon pinkish pickles ginger shreds that is commonly found in gyudonya san (shop that serves beef rice bowls) and is almost always all you can eat. They all so sell it in supermarkets all over Japan. However, Osaka is the #1 city in Japan in devouring these pickled delicacy. Due to the popularity of it in Osaka,, it is not uncommon for people to develop new ways of using or cooking with beni-shouga. The most uncommon food where you can only find in Osaka is the beni-shouga tempura. They cut the beni-shouga into thinly sliced medallions, put 2 on a skewer and deep fry them tempura style. If you like beni-shouga or strong ginger taste then this yummy tempura is a must try. 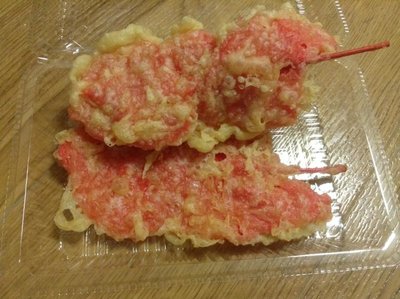 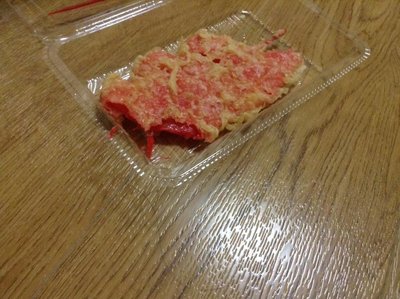